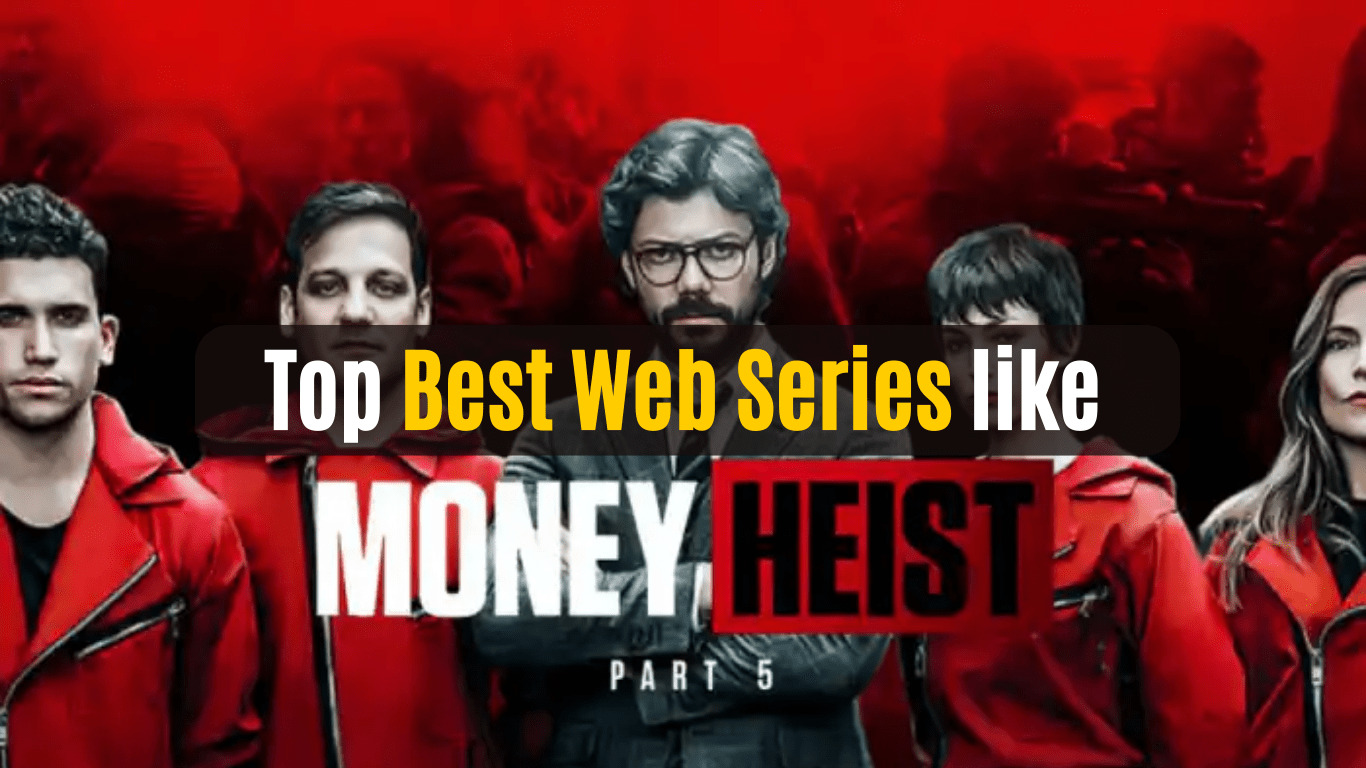 So there are so many web series here that it is difficult to decide which web series to watch first.

Lupine is an Action, Crime, Mystery, and Best Thriller Web Series on Netflix. its first season released on 8 January 2021. It has 2 seasons and its second season is released on 11th June 2022. The total number of episodes is 10.

The story is about a classic French thief named Lupine. And that world-famous gentleman is a thief and a master of disguise. His stealing techniques are shown brilliantly. He steals anything with his brilliant techniques and easily escapes from the police. Lupin keeps his character a secret from the rest of the world. He steals to avenge the injustice done to his father

Peaky Blinders is a British crime, action drama series based on Birmingham’s Gangster. Its first season came on 12th Sept 2013 on Netflix.

The story is about Birmingham. There are, Many Gangsters available and peaky Blinder is one of them. Peaky Blinder is the name of a Gang of Gangsters. whose leader is Thomas Shelby. Thomas Shelby is a very intelligent and Dangerous man. He can solve any problem with his intelligence and kill anyone with the support of his brother. He kills everyone who interferes with his business and family.

It is very popular because of its story, dialogue, and cinematography. you can be addicted to this series because it has 6 seasons and the Total number of episodes is 36. if you are looking for the best crime web series on Netflix. then Peaky Blinders is the best one.

Ozark is a crime thriller drama series released on Netflix in 2017. Jason Bateman stars as Marty Byrd, a financial planner. And he relocates with his family from Chicago to the Ozarks. His troubles begin when he starts money laundering for a Mexican drug dealer. Marty Bird drowns a Mexican drug dealer’s money. And then a Mexican drug dealer threatens to kill Martybird’s family. After this, he has to face many problems in his life. And how he suffers and solves the problem. You have to watch the series to know this. It has 4 seasons and the total number of episodes is 44.

Prison Break is an American drama series released on August 29, 2005. It is full of crime and thriller Series. And one of the best web series on Hotstar. The story is about the bond between two brothers. One of them was charged with murder which he did not commit. After that his brother who is an engineer. He gets himself arrested on false charges so that he can save his brother from the death penalty. His brother makes a master plan to free his brother from jail. The series has 5 seasons and the total number of episodes is 90.

Breaking Bad is one of the best crime web series on Netflix. If you like a crime drama. Then definitely you will like Breaking Bad. Breaking Bad is an American drama series released on January 20, 2008. Bryan Cranston is in the lead role, his name is Walter White.

The story is about Walter White who is a chemistry teacher. And he is a talented man. One day he learns that he has cancer and is about to die in a few years. After that, he wants to earn more money so that without him his family will not face any problems in the future. And he started making drugs with his student and selling them. And gradually becomes a drug mafia. And as soon as he becomes a drug mafia he becomes dangerous. The series is trying to tell how an innocent man turns into a monster when he is forced by circumstances. Breaking Bad has a total of 62 episodes in its 5 season

Sherlock Holmes is a British crime thriller and mystery drama series based on detective life. The series is amazing and is the best Web Series on Amazon Prime. Its first season was released on 25 July 2010

Benedict Cumberbatch played the role of Sherlock Holmes. He is very intelligent and settles all matters with his friends. The cases that “Sherlock Home” solves. His friend writes those cases on his blog. Because of this, he becomes popular all over the world. He makes many enemies while solving cases but in all 3 seasons of the series, James Moriarty is the main villain. Season 3. The series has a total of 13 episodes.

BodyGuard is a British political thriller drama series released on 23 September 2022 on Netflix. The story is about David Budd, a recent war veteran who suffers from a disease called post-traumatic stress disorder (PTSD). He is a police sergeant. And works in Police Specialist Protection Branch. He has been entrusted with the security of Hon’ble MP Julia Montagu. He has to protect her but he doesn’t want to do that.

Because he thinks that Julia Montague is the reason for the recent war.

And he is responsible for his illness. There are many twists and turns in this series and there are many murder attempts on Julia Montagu. And sometimes it seems that David Budd is the main reason for this assassination attempt. The Series has one season and 6 episodes

Narcos is a historical drama series available on Netflix. Its first season was released on 28 August 2015. The series is based on true events in the 80s. The story is about the Colombian  Drugs Lord and shows risen of Cocaine Trade in Colombia in the 80s Era. The series has a total of 30 episodes in 3 season

Mind hunter is a Crime, Thriller, and Mystery Drama Series available on Netflix released on 13th October 2017. The story is about an FBI agent who helps police to stop murder by a serial killer. and he takes interviews with serial killers to know, what the reason behind becoming a serial killer is, what the actual killer thinks before the murder. and what kind of strategy makes. It is based on true events in the 1970s Era. The series has 2 seasons and a total of 19 episodes

Locked Up is Netflix’s best thriller web series. It was released on 20 April 2015. The series is created by Money Heist creator. And the series also features the Money Heist characters, Nairobi (Alba Flores) and Alicia (Najwa Nimri). The story is about a young woman named Macarena Ferrero who falls in love with her corporate boss. And she breaks the rule of law for her master. She manipulates multiple tax accounts. And because of this, they are accused. And She is put in the prison of a high-security woman. Where She has to face many problems. The series shows how difficult a woman’s prison life is. Now how will she escape from jail? To know this, watch 48 episodes of 4 seasons of this series.

Lord of Skies is a crime drama series whose first episode was released on 15 April 2013. The story is about a simple man who wanted to become the richest man in the world. And he will do anything to become the most powerful person in drug trafficking. He also changes his face to maintain his power. The series shows how a humble man crosses all limits to gain power. The series has 7 seasons and 611 episodes. You can watch it on Premium Peacock.

High Seas is a Spanish crime and mystery drama series released on Netflix on 24 May 2021. The story follows the mysterious death of a luxury shipwreck that traveled from Spain to Brazil in the 1940s. The mysterious man is not on the passenger list who was murdered. Many secrets are uncovered by the death of a mysterious person. The killer is on the ship and among the passengers. The series has 3 seasons and the total number of episodes is 22.

White Lines is a Spanish Crime, Thriller, and Suspense Series released on 15 May 2020 on Netflix. The story is about a girl named Zoe. She leaves her home and everything to investigate her brother who has been missing for 20 years. The story revolves around what he did 20 years back. He has to face many problems along the way to investigate his brother’s killer. Adults scene also available in this series If you like adult scenes then you will definitely like this series. The Series has only one season and 10 episodes

In conclusion, I gave you a list of the best web series like Money Heist. All the series are engaging and entertaining. you should note the above series in your watch list. It will give you the same vibes as Money heist. and all the series are addictive. if you begin to watch episodes so you will definitely like to finish them all as early as possible

If you think that I have not mentioned any web series which gives you Money Heist-like vibes. So you must tell by commenting

Hello, my name is Amjad Ansh and I am an SEO executive. I specialize in helping businesses improve their online visibility and drive more traffic to their websites through search engine optimization techniques.