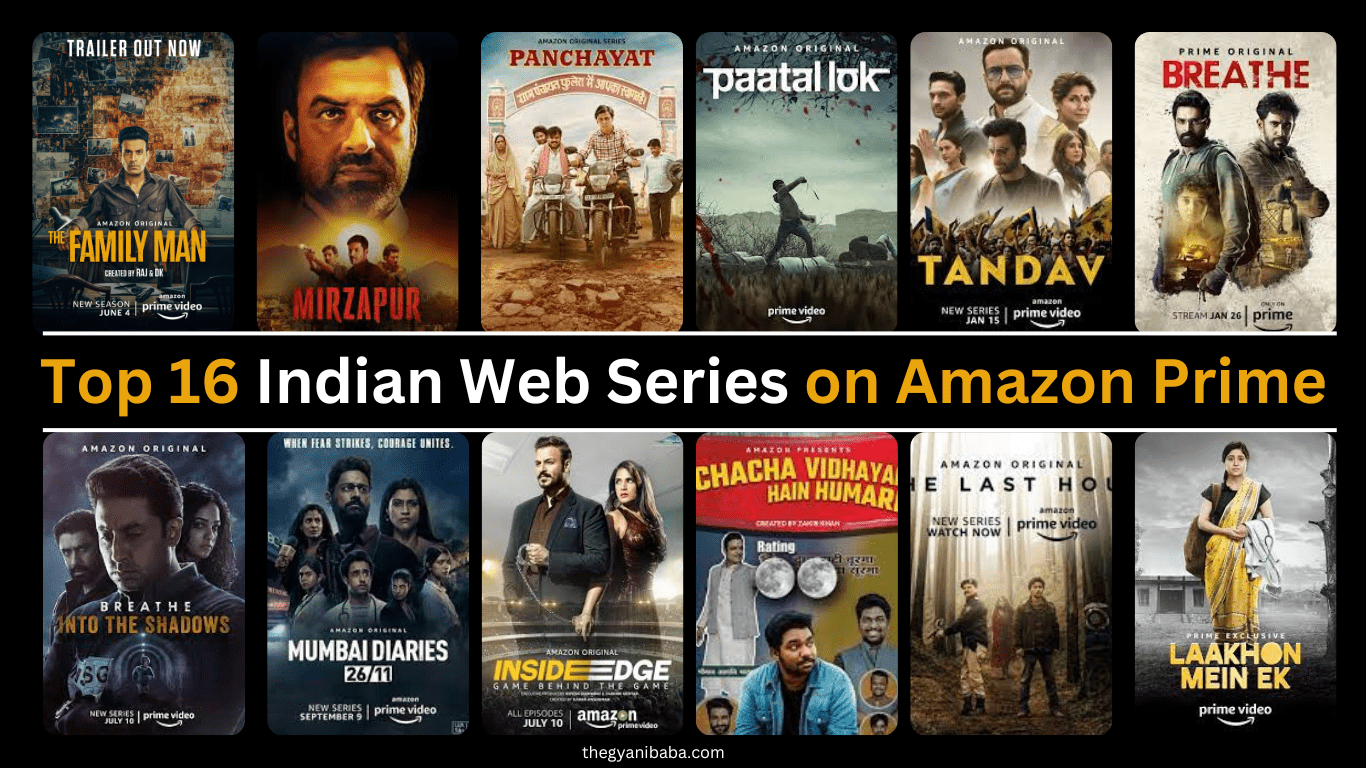 Manoj Bajpayee starred in The Family Man Season 1, a crime thriller series that was released on Amazon Prime in 2021. Manoj Bajpayee as Shrikant Tiwari who is an NIA officer. A Zulfiqar mission is organized by a terrorist group. And Shrikant Tiwari is seen solving this mission. The other side is his family which is not aware of his real job. His family was always disappointed with his job. Because Shrikant Tiwari never spends much time with his family. Their family drama makes this series super amazing. Family Man Season 1 has 10 episodes on Amazon Prime.

Family Man Season 2 looks different in the beginning. Because Shrikant Tiwari has left his job at NIA (National Investigation Agency) and started working in an IT company. And also started spending time with his family. But his habit doesn’t change. And frustrated with his IT job, he once again joins the NIA. And another mission appears to be solved. He is seen stopping the attacks on the PM of India, and also saves his daughter who fell in love with a young terrorist boy. Family Man season 2 has 9 episodes on Amazon Prime

Mirzapur Season 1 starring Pankaj Tripathi, Ali Fazal, Divyendu Sharma, and Vikrant Massey is packed with crime thriller and action series on Amazon Prime. Due to the dialogues, story, and acting, the popularity of this series is very high among the young audience. Mirzapur is the crime city and Kaleen Bhaiya rules Mirzapur. And their son is Munna Tripathi who is very dangerous and badass. Munna Tripathi wants to rule Mirzapur. But Guddu and Bablu, two brothers working under Kaleen Bhaiya, manage Kaleen Bhaiya’s gun business. This makes Munna Tripathi jealous and Munna Tripathi fights with Guddu and Bablu throughout the series over their rights. Mirzapur Season 1 has 9 Episodes

Season 2 starts where season 1 ends. If you didn’t watch season 1 so first of all you have to watch season 1. Now come to the topic, in season 1 you saw Munna Tripathi kills Guddu’s Brother and his wife Sweety. Now Guddu wants to take revenge against the whole Tripathi family. And Guddu Bhaiya Build his own gang to kill Kaleen and Munna Tripathi. This Series is also full of crime and action. It has 10 Episodes

Panchayat is a comedy-drama series released in 2020 on Amazon Prime. It is shown in this series that due to a lack of better employment opportunities in Phulera village of UP, an engineering graduate boy joins as Panchayat Secretary. And now what are the challenges before the Panchayat Secretary?

In the beginning, he is disappointed with his current situation, village life bores him, and dislikes his present life. The Panchayat series shows the genuine problems of the people of the village and the Panchayat system. It has 2 Seasons. Season 1 has 8 and season 2 has 8 episodes

Saif Ali Khan, Dimple Kapadia Dino Morea and Sunil Grover starring Tandav is a Political drama, Crime thriller fiction series released in 2021 on Amazon Prime. This series shows Saif Ali Khan as Samar who is the son of the PM of India. Samar kills his father to take the power of PM. Though, NO one knows about his crime. Now How did he hides this secret from the public and How the Politician takes the advantage of many innocent people to gain more power? This series defines very well. It has 9 episodes

Breathe is a crime thriller drama series released in 2018 on Amazon prime. This series shows R Madhvan as Danny,  He seeks such people who decided to donate his organ after his death. And He makes a plan to kill them. So that he could save his dying son who needs human organs to survive. It has 8 episodes

7. Breathe Into The Shadow

Breathe: Into the shadow is a crime thriller and suspense series on 10th July 2020 on Amazon Prime Video. Abhishek Bachchan is in the lead role named Avinash in this series and he is sarcastic. One day a mysterious masked man kidnaps Avinash’s daughter and forces him to kill someone. who was the masked man and how did Avinash save his daughter from the kidnapper? will Avinash murder anyone? To know this finish the 12 episodes of this series

Made in Heaven is fictional Drama Series released on 8th March 2019 on Amazon Prime Video. The Series is about two wedding planners who organize the wedding of Big and Small Families wedding And also Spy on the family of the bride and Groom. Tarun is a Bisexual who hides their true form from Society and Tara is the wife of a Big Business Tycoon who suffers to balance their personal and professional life. It has 9 Episodes

Guilty Minds is a Court Room Drama Series released on 22nd April on Amazon prime video. This Series is about two legal firms who fight cases against each other. Every episode has different cases of story and all episodes are connected. If you are planning to watch this series you have to watch episode 1. The series has 10 Episodes

Hostal Daze is a Hindi drama series whose first season was released on 13 December 2019 on Amazon Prime Video. and shows the life of an engineering hostel. The series shows how good boys turn bad during hostel life. The series is a fun, thrilling, comedy, and relatable for the youngest. How Hostel Life Actually Exists. You will feel related. The series has 2 seasons. Season 1 has 5 episodes and Season 2 has 4 episodes.

Mumbai Diaries 26/11 is based on the 26/11 attacks in Mumbai. It is crime, thriller, and medical drama series released in 2021 on Amazon prime. When 26/11 occurred then how was our hospitality system affected and faced this situation? How did Dr play a crucial role in this situation? It is shown in this series with dramatic scenes. It has 8 episodes

Inside Edge is an Indian cricket drama series. Its first season was released on 10 July 2017 on Amazon Prime Video. The series is about politics in cricket. A team named Mumbai Marwicks is present in the T20 Powerplay League. What kind of politics happens inside a cricket team?

What can a person do to achieve all this fame and money from cricket? All this is shown brilliantly in the series. The series has 3 seasons and the total number of episodes is 30

“Laankhon Me Ek” Season 1 is a Hindi Drama Series based on the IIT life of a boy released on 13 October 2017 on Amazon Prime Video. Ritvik Sahore is in the lead role his name is Adarsh. The story is about a boy from a middle-class family who just passed his 10th. and his parents send him to IIT coaching for preparing for IIT. But Adarsh doesn’t want to be an IItian. He wants to be a mimicry artist. But under the pressure of their parents, he has to go to IIT coaching. And How Adarsh’s life changed after joining the coaching. To Know this you have to watch 6 episodes of this series

The Series has another season released on 12th April 2019. And the series “Lankhon Mein Ek” Season 2 is a different story from Season 1. In this series, a girl starts a campaign in the village for a cataract operation. But no one is ready to do so. Although she reassures them. But most people lose their eyesight after the operation. Now what is the reason behind this and who is the real responsible for this incident? This series shows the corruption happening in the medical field. The series has 8 episodes

Modern love Mumbai is love drama series released on 13 May 2022 on Amazon Prime video. This series is based on a weekly column for the New York Times. The series is about love, Romance, and affection. The series shows love has no boundaries, age, or gender. It has 6 episodes and each episode has a unique story. There is no connection between any episodes

The Last Hour is a Horror Suspense and Thriller drama series that was released on 14 May 2021 on Amazon Prime Video. Sanjay Kapoor is in the lead role as the police officer in this series. The story is about the North East city of India where many mysterious murders take place. During the investigation of the case, the officer meets a young mystery boy who possesses God’s power. He can see the time an hour before it by lying next to the dead body. The series has 8 episodes

“Chacha Vidhayak Hain Hamare ” is superb comedy-drama series whose first season was released on 18 May 2018. The stand-up comedian Zakir Khan whose name is Ronny is in the lead role in this series. The series is about a 26 years old jobless boy whose character is played by Zakir Khan.  Ronny’s life is based on lies because he told the rest of the world that he is the nephew of MLA.because he wants to be a youth leader who wants to solve the problem of people. While he has no ties with any MLA. The series has two seasons and the total number of episodes is 16

In conclusion, There is no doubt that the best Indian Web Series on Amazon Prime are some of the most popular online content out there. Whether it’s for entertainment, education, or just for a good laugh, these series are definitely worth checking out.

Hi, My Name Is Amjad Ansh. I am a Digital Marketer & Blogger. The Gyani Baba Is a Guest Post Site. And It is Number One Source For Learning About The Digital Marketing World, Entrepreneurship, Tech, Health, Fitness & Relationship.